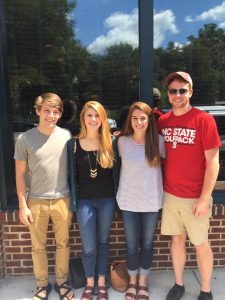 Oymyakon, Russia (the coldest place on earth) . He is living and active everywhere you call home. I am so thankful that as a member of the Kingdom I am taking part of something far greater than myself. In fact, I am thankful to take part in something where I am not even necessary. When Paul spoke in Athens he said, “The God who made the world and everything in it, being Lord of heaven and earth, does not live in temples made by man nor is he served by human hands, as though he needed anything, since he himself gives to all mankind life and breath and everything. And he made from one man every nation of mankind to live on all the face of the earth, having determined allotted periods and the boundaries of their dwelling place, “ This is the message that God has been trying to hit me over the head with over the last couple of months. This is the message I hope I never forget.

“I am a selfish prideful person.” When I introduce myself to others this is how I should start. Unfortunately, even that would come from a place of pride, as I would be proud that I was big enough to admit it when others wouldn’t. I was confronted with how large of a sin it was as I read Mere Christianity this past summer. C.S. Lewis wrote, A truly humble person does not think highly of themselves or low of themselves. They do not think about themselves. In fact, if you ever encountered a truly humble person you probably wouldn’t think of them as humble, but as someone who finds it very easy to be joyful. If you thought about them at all it might be out of jealousy that someone could find joy so easily (Paraphrased). As I read those words I couldn’t help but love them. That’s what I want. I think deep down, it’s what we all want. To find a way to forget about ourselves. Because truthfully, there has never been anything we have ever enjoyed in the long run that was solely for our benefit.

So God began to work in my life to reveal pride and selfishness. I won’t bore you with all the ways it was revealed but I can tell you it came up time and again. As I talked to a friend about my struggle he said something I had never realized. Often times when you are being prideful, you don’t lift yourself up, but drag others down. That’s what I have been doing, that’s what I want to stop doing. Because everyone I encounter knitted together by the same God that knitted me together. Everyone I encounter is a sinner just like me. Everyone I encounter is offered the same grace from the father as me. So why assume the worst of them? Why assume the guy that cut me off on the road did it because he is a selfish jerk? Why assume that the soccer team that scores 13 goals on me did it just to embarrass me? Why assume that the middle school who complains about the game that I organized did it just to hurt me? Why assume that a teacher’s rude response was because they truly hated me? Maybe, the person on the road made a mistake and never saw me (been there). Maybe, that soccer team was shutout last week and is trying to build back some of their confidence (done that). Maybe, the game is actually awful and I should listen to the student (middle schoolers have been right once or twice). Maybe, the teacher has been having a rough day and the comment came from a place of exhaustion not hate (I can’t even begin to count how many times I have been there). Maybe, just maybe, it isn’t all about me anyway.

So that’s one of the things the Lord has been teaching me recently. As for Fusion, God has worked in my community by enabling me to have many spiritual conversations with friends around Raleigh this semester. He has grown me as I practice investing in and discipling others. I don’t personally meet with large groups when I am discipling but one-on-one. As you pray for Fusion in Raleigh, pray that we are able to grow in our outward work of evangelism.